Village of the Damned is now finished for another year.  It's been a great festival with a fantastic selection of films and artwork that all the visitors enjoyed. We're already mulling over plans for next years fest but before we move on completely there's the little matter of announcing the 2011 winners of our VOTD awards.

The first is the Best Film award as judged by us, the festival organisers, based on what film most met the VOTD objectives.  This year the award goes to....
Envy the Dead.  This Arab zombie film was a UK premiere filled with interesting shots, clever ideas and an incredibly atmospheric soundtrack.

The second award is the Audience Award, which (surprise, surprise) is chosen by the audience.  After each screening visitors had the chance to pick their favourite film and after the festival was finished we tallied up the votes to find out which film appealed to our audience the most.  The film that came out on top was.... Escape From Hellview.  This dark animation both terrified and delighted the festival goers with its style, reminiscent of 'The Snowman', which  depicted some very  disturbing and scary scenes.
Posted by Unknown at 15:38 No comments: 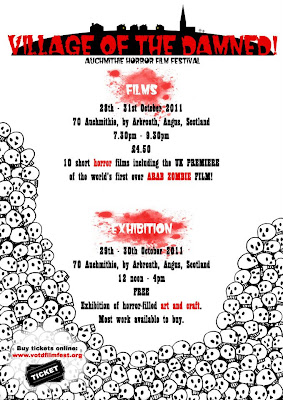 All films and artists have been announced for the 2011 Village of the Damned festival and with only 2 days to go until opening night we are super busy getting things ready.  We are very excited about our spectacular programme of horror shorts and the selection of art and design is looking pretty spooky too.

Tickets are still available and can be bought online over on the tickets page.  The programme will be showing each night from Friday 28th - Monday 31st, doors will be thrown open at 7 with the films beginning at 7.30 each night.  And don't forget we'll be open during the day on Saturday and Sunday 12-4 for our exhibition.

Village of The Damned is a horror film festival that takes place in Auchmithie, Scotland. We aim to show an excellent mix of horror films as well as showcasing spooky art and design.